This last week we’ve been building new hives. The long Langstroths are complete. These are essentially horizontal hives that accept Langstroth frames, which are the most commonly used type of frames in the US. The idea with this configuration is that a beekeeper can open and inspect the colony without having to lift the stacked boxes of the traditional Langstroth hive, which can weigh nearly 100 lb when full of honey.

A closed long Lang. with a gable roof. 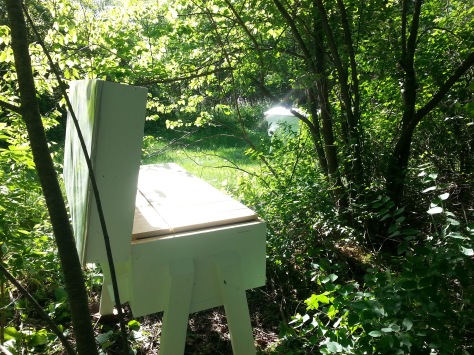 An open flat-top hive with the cover boards visible.

Inside the hive, a series of boards covers the frames and also lends to a gentler inspection: one board is lifted at a time and the frames beneath are inspected. As only a little of the top of the colony is exposed at a time, as opposed to exposing all of the frames at once in standard hives, the bees are generally more relaxed.

Moving Nucs in the Bee Yard

Beekeepers have a rule: it is safe to move a hive 2 ft or 2 mi but nowhere in between. The idea is that as bees know where their hive is located and if they’ve been oriented to a specific location, the field bees will fly off to gather pollen and then think about returning home. If the hive has been moved 2 ft, the returning bee will smell its hive and find it no problem. If the hive has been moved 2 mi, the bee will realize it is in a new place as it leaves the hive and will create a new mental map of its hive location before going out to gather.

Supposedly it is not possible to move hives, say 50 ft, like I wanted to do, but I was able to use two tricks to move the nucs following Michael Bush’s recommendations. Essentially I am tricking the bees to think that their hive suffered some sort of catastrophe. In the wild, honey bees lived in hollow trees. If that tree fell down, they’d have to reorient to the new hive location. So two nights ago (all the bees return to the hive for the night), I put screen in front of the nuc entrances and moved the nucs to their new locations. In this case, I put the nucs on or below the long Lang. hives, as shown in the above picture. I then piled leaves and branches thickly in front of the hive entrance. When I open the hives in 72 hours, the bees will stream out (they dislike being confined and I could hear them gnawing at the hive gaps to try and find a new exit) through the branches and reorient to their new location. I’ll give them a day in the nucs before installing them in the hive.