It’s been a busy two weeks at the Low Technology Institute. After some unseasonably cold temperatures and a late snow storm, the chicken coop is complete enough for the hens to take up residence. This has been the top priority as we ran into an “Old Lady Who Swallowed a Fly” situation: we had to chop the tree, to cut the timbers, to build the coop, to move the chickens out of the garden, to make the beds, to plant the seeds in time for the spring. Also, we were preparing for the Earth Day Conference, and organizing workshops for this spring.

It is too cold and wet to get potatoes planted out, but we are gathering materials, organizing straw sources for mulch, and just plain waiting for May to get here, when we install our bees into the breeding hives and the potatoes can be put out.

We were delinquent on the podcast and videos yet again this fortnight, as all hands are on deck for finishing the chicken coop. We will have the first video outlining the chicken coop build out this week (or next). We also hope to have some instructional videos on making beeswax wraps and other topics out soon.

The chicken coop has now been roofed and interior, temporary walls have been built. In the near future we’ll be putting traditional wattle-and-daub walls covered in whitewash. Traditionally the foundation would be laid before building the structure, but because of the weather — as you can see in the photos — we had to wait until nighttime temperatures were above freezing. To lay the bricks, the coop was jacked up with 8-ft levers and the bricks mortared into place. A thick layer of mortar was then put on top and the coop was lowered.

The run is metal fence, which has to be buried in order to deter digging predators. In our case, I dug down about 10 inches, bent the bottom of the fence out, and then put large treated timbers on top of the flat bottom — I’d been looking for a use for these chemical-laden timbers since I dug them out of our garden area, since they shouldn’t be used for food. I also ran a layer of chicken wire under our shed to deter burrowing rodents from taking up residence so near the coop.

Coop in the snow.

Foundation laid below the coop. 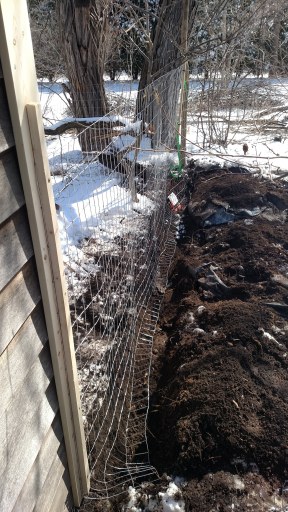 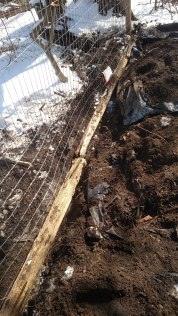 Wire fencing to keep critters out from beneath the shed.

Plant starts are continuing apace. The seed potatoes are out in the sun to sprout before being planted. The peas should have been sown directly, but because of the poor weather, I decided to sprout some inside to get a head start. I’ve been using our oven as a starting chamber because the pilot light holds the temperature between 80 and 90°F. We were able to use worm casings from our worm bin to jump-start the seedlings nutrition. 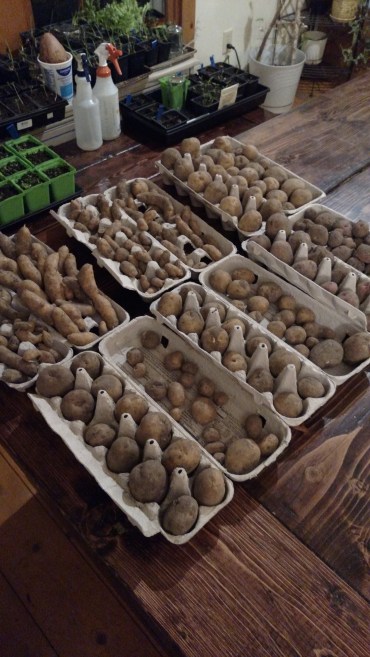 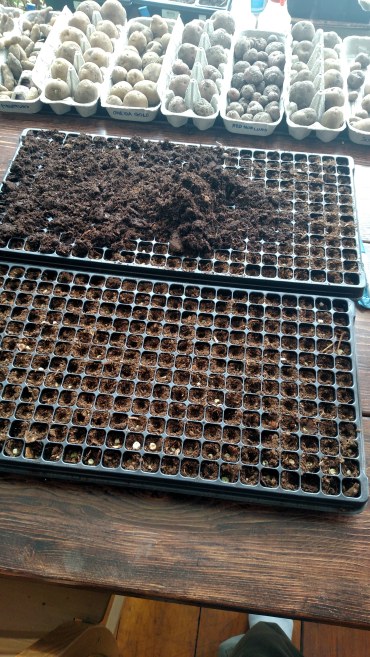 Flats of peas for early sprouting.

It’s a great time for working on fruit trees and bushes. We planted two apple (Halverson and Wolf River), two peach (Madison), and two plum (Black Ice and Toka) trees. We also attended a cider apple grafting workshop with the University of Wisconsin. Hopefully some of our grafts will take and we will be able to plant them out next year. 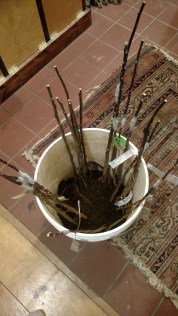