Last year I built prototype solar panels and summarized the preliminary data gathered in some test runs (see this project’s archive here). Yesterday I provided the plans and schematics for this build. Today I’m going into some of the nitty gritty installation details.

Burying the Supply and Return Lines

The supply lines are buried 2 ft below the ground surface. The 3/4-in copper pipes are encased in foam insulation and sheathed by a 4-in PVC pipe. To run the lines outside, a 5-in hole was cut in the 8-in concrete foundation of our home. This was done using a hammer drill with a 5-in cup bit. A few inches at a time were cut and then chiseled out using the hammer setting on this drill, rented from the local hardware store. It made a surprisingly clean hole.

On the outside, I had dug a 30-in-deep trench. A 2-in base of pea gravel was laid in the bottom of the trench, which had been sloped away from the house. This should allow water that seeps down to this level to drain away from the new hole I just put in the foundation. Water should not be an issue here, though, as a solar panel will be going over this space, and it will shed water away.

The PVC pipe is secured on the outside by a flange that had been sealed and screwed into the concrete foundation with masonry screws.

5-in hole through 8-in concrete foundation. 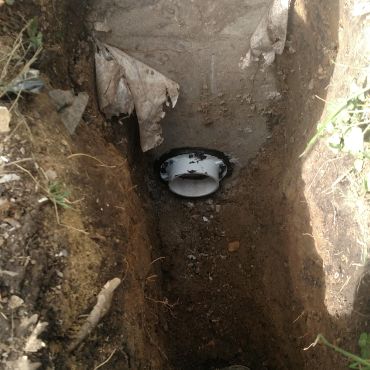 Flange installed on outside of foundation. 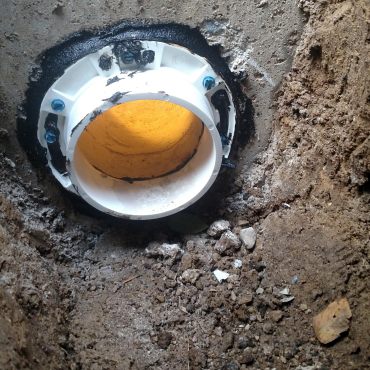 Close-up of flange: sealed and held in place with masonry screws.

The panels are supported on footings buried 2 ft deep with a belled bottom to prevent frost heave. The footings are 8-in in diameter and sono tubes were used to extend the top of the footings to a constant height among all the different footings. This will make the panels all level and consistent.

A triangular support was built of a 2-×-4-in hypotenuse and bottom leg and a 4-×-4-in back leg, connected by carriage bolts. 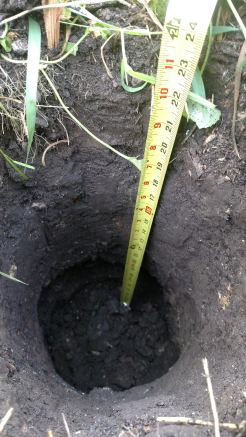 An 8-in sono tube to shape the cement footing. 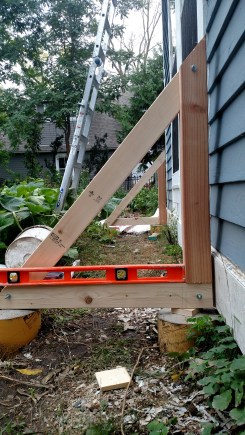 The triangular support for the solar panel installed level on the footings.

The supply and return lines were sweat soldiered before being slipped into the PVC T-junction. The 4-in PVC is large enough to slide a straight copper pipe through before the T is glued to the straight pipe. Insulation was slid on once the pipe and T were joined. Another length of PVC was glued to the perpendicular outlet of the T — this arm will rise out of the ground. A shorter length of PVC was glued to the remaining arm of the T — this one will be used next year when the system is expanded, but now it is just sealed against water ingress. 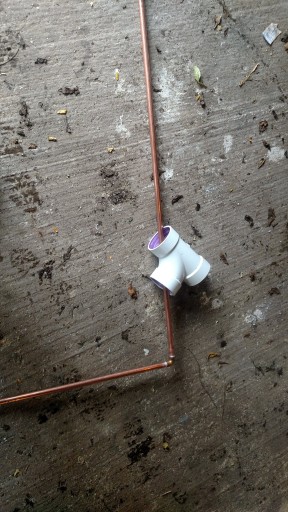 T being fitted onto pipe.

The whole assembly was then fitted into the flange attached to the wall. More pea gravel was poured on top and around the PVC sheath before the trench was refilled, leaving about a foot of the PVC sheath above ground and in line with the panel bottom.

Pipe being fitted into flange.

The panel, built of 2-×-4-in and 2-×-6-in lumber was set on the triangular supports. A hole had been cut to allow the PVC and plumbing to pass up into the box. The return line will sit below the level of the collection grid, so that was plumbed, set into the 2-×-4-in studs, and insulated.

Once the return line is plumbed in, batts of insulation are installed. These are 2 in thick with a reflective surface directed towards the collection surface to bounce back as much heat as possible. These batts have 2 in of reflective material extra on the long side — these are intended for insulating duct work — which I used to staple over the stud and provide a continuous layer of reflective material. 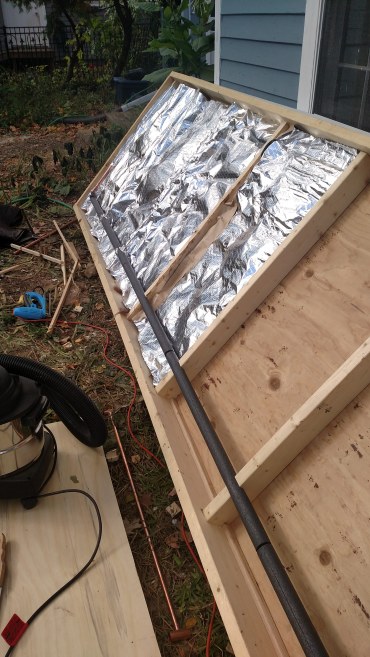 Detial of the excess reflective material stapled to the studs.

“Lab Notes” are a series of posts chronicling the daily progress our research projects. Research Project No. 1 is the testing and installation of a solar heating system for domestic water and space heating. These notes may be useful for anyone interested in building such a system at home. Others might prefer the more succinct guide to solar heating, videos, and other formal publications that will result from this research project and be posted to the website as they are available.