The garden is enjoying the warm temperatures and copious rain over the last few weeks. We were not able to get the entire garden area turned over, but we did get raised beds, a large potato patch, and a few burn areas planted.

The potatoes are 2 ft high and now sprouting flowers. Unlike other plants in the garden, such as garlic, one shouldn’t worry about flowers on potato plants. It does not mean the potatoes have bolted, rather it indicates a healthy plant that is starting to produce tubers. We’ve been mounding up the soil around the plants to support them. In the next few days, we’ll spread straw over the ground to help keep the soil below 80ºF, above which tuber production shuts down.

The pumpkins and butternut squashes have sprouted. The ground around them was not fully cleared, but the idea is that the large, sprawling squash vines will choke out competing weeds, thus doing much of the clearing work for us. The different varieties are kept apart to avoid crossbreeding.

We did two brush pile burns and planted corn in one of the footprints. This is similar to the milpa (slash and burn) practice found in Latin America. Some of the corn is sweet, but much of it is grown for chicken feed. We separated our two types of corn so they do not cross pollinate.

In the second burn area, we planted row crops. Two winter root crops — rutabaga and parsnip — are planted in every other row. In between are quicker crops — beets and Swiss chard. By the time the quick crops are done, the winter roots will have all the room they need to store late season energy. 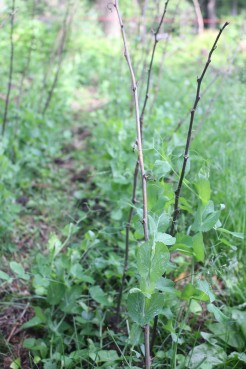 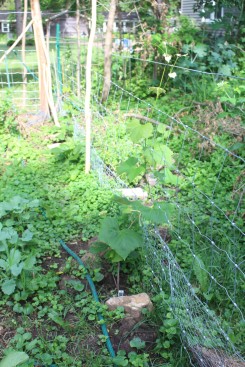 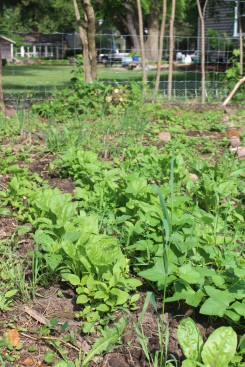 The peas are growing up the brush trellises but no flowers have been put out yet. As the temperatures are hitting the 80ºFs every day, they might be too hot. Time will tell.

The grapes planted last month are already at the 4-ft wire. They will be trellised out along this wire and the one above it. This forms part of a living fence around the garden.

The beets and onions are also growing prolifically and need to be thinned out.

We finally finished the large raised beds. Each measures 5 × 20 ft. In this area we have planted lettuces, spinach, mustard, okra, eggplant, cucumber, and many other plants that need more careful observation and attention.

Thunderstorms have begun and sweep across southern Wisconsin more days than not, it seems. It is good for the plants and gives me a break to come inside and write blog posts.