Chronic Wasting Disease (CWD) is spreading among elk, moose, and white-tail and mule deer in North America. The affliction is a type of transmissible spongiform encephalopathy. “Mad Cow” Disease (bovine spongiform encephalopathy) is the best-known disease in this family, as is the human-borne Creutzfeldt–Jakob Disease. It was first found in a deer-research facility in Colorado in the late 1970s and has since spread to much of the US and a few provinces in Canada. It is a pernicious disease, and while its spread isn’t fully understood, it appears to be transmitted through excreted prions (malformed proteins) from infected animals.

CWD does exactly what the name describes: the deer wastes away, losing much of its body weight before dieing. The infected animal also becomes listless, suffers from tremors, walks repetitive patterns, and has excessive salivation and urination (which may help spread the disease). This disease has not yet been transmitted to humans, but I bring this up because it something anyone eating hunted meat should be aware of.

I am not going to examine the pros and cons of eating meat or eating hunted meat here, but you can listen to much of the argument supporting eating less meat and a preference for ethically hunted meat over that coming from confined animal feeding operations (CAFOs) on the Low Tech Podcast, Episode 8, found here.

In many states free CWD testing is available, usually through a state’s Department of Natural Resources. Here in Wisconsin, that is the case, and I brought in a sample of my own deer to be tested.

Much of the diagnostic evidence for CWD can be found in the nervous and lymph systems, so the entire head and top 5 in of neck are removed from the animal after it has been field dressed and skinned. This is then brought to a self-service kiosk, where it is inserted into a plastic bag, information is given on a form, and then it is all bundled together and deposited for testing. Ten days later, the hunter can check the status of his or her animal online. 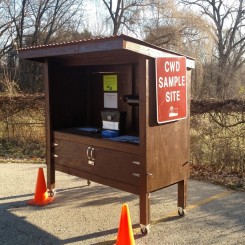 Again, this disease has not been transmitted to humans, but you don’t want to be the first one. Everyone can avoid exposure by not eating or handling the internal organs or the nervous and lymph systems.

One thought on “Chronic Wasting Disease”